Alessandro “Spazio” Alemanno has been born in Oderzo in 1972. He studied at Conegliano V.to, where in 1991 he get the high school agrotechnic diploma.

In Conegliano V.to he met his first friends-writers (Webster, Ken) and began his artistic journey.

In 1990 Spazio entered in the NSN Crew (a group composed of writers from Conegliano and surroundings areas). After a while, he moved to Udine, in order to study at university, where he met Boost. The two writers began a self-taught route in the field of art.

He is a co-founder of “La Cremeria” Crew (LAC), which is a group that unites writers and aerosol artists. La Cremeria has been born in 15.8.1996.

From 2002 to 2009, Spazio has worked as aerosol designer, particularly with the tasks of painting, decorating and preparing clubs. This activity has led him to work all around Italy.

In 2008 he is a co-founder with other LAC members of “Kantiere Misto”, a cultural association aimed at promoting urban culture and creativity (ACU).

His research, artistic and personal at the same time, has led Spazio to participate at 7 “Meeting of Style”.

Till now he has decorated, both individually and in team-work, some tens of thousands of square meters of wall.

Furthermore, he has made many others art works and he has organized several exhibitions and events in the fields of writing and art. Moreover, as a writer he has participated to various exhibitions all around Italy.

According to Spazio, art is a social activity through which is it possible to stare experiences, thoughts and values. Moreover Art needs commitment, constancy and fatigue. 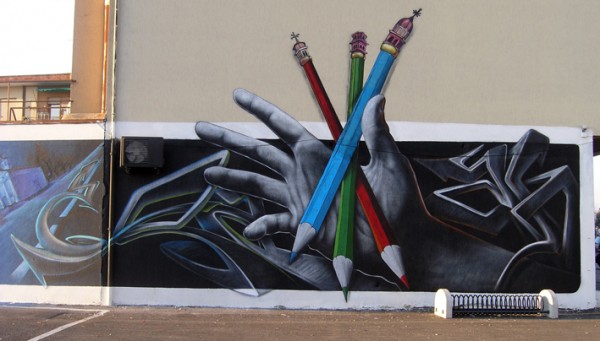