As anticipation of ELEMENTI SOTTERRANEI 2013,  the Urban Art Festival which takes place in Gemona del Friuli between June 7th and 9th, Bravi Ragazzi surprised the guest and visitors of Città Fiera (UD) with a new initiative called ELEMENTI IN CENTRO.
This initiative took place on May 16th and 17th and it was highly supported by Citta’ Fiera which, besides being the biggest shopping center of the region, is very interested and keen to value and improve the territory  and the common idea about an artistic discipline too often considered vandalism: Graffiti-writing.
Bravi Ragazzi have recently painted graffiti on the external wall of the University Rizzi (in collaboration with Ce.Vi. and Università di Udine) and in Palazzo conTemporaneo in Udine. In Citta’ Fiera Bravi Ragazzi have decorated with their creativity the entrance of three roofed parking areas.
“Weaponed”with spray offered and sponsored by Kolorand and  inspired by enviromental themes, Kerotoo, Done and Scarpa (from Gemona) were helped in the realization by some of the writers who took part to past editions of Elemnti Sotterranei  such as Telmo Miel (The Netherlands), Dado ( Bologna), Made ( Padova), Shine, Rikro and Gatto (Milan). 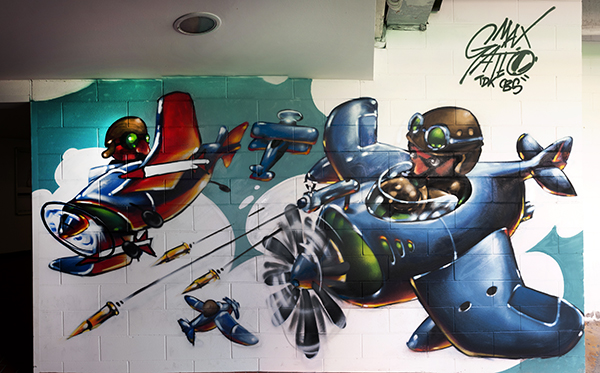