On the occasion of WORLD WATER DAY, students from allover Europe were reunited to take part to the Youth European Forum for Water. On march 21st 2013, students from different parts of Italy met in Udine to get ready for the international meeting. On the same day  a massive graffiti was made on the walls of the buildings of the scientific faculties- RIZZI- of Universita’ degli Studi di Udine.

On occasion of the International Water Year Cooperation and the Water Day which took place on March 22nd 2013, a series of initiatives, concerning the subject, were organized in Udine by CeVI- Centro di Volontariato Internazionale- and NeoAteneo – Associazione Studentesca- .

During the seminar, which was open to a public attendance, the Italian delegation of students, selected by CeVI, discussed and introduced proposals in defense of the use of water. These proposals will be presented to the European politicians who will take part to the Internationa Forum on water -Padua, May 11th and 14th -. The exceptional lecturer of the convention in Udine was Riccardo Petrella, writer of the first Manifesto for the right of Water.

At 12:30, in the service area outside RIZZI, the graffiti, realized thanks to the collaboration with the association BRAVI RAGAZZI and the Universita’ di Udine, will be inaugurated.

The artists that worked together to realize this outstanding graffiti on the theme of water are four of the most popular and important European street artists: Malakkai from Spain (malakkai.es), Zone one from Italy and France (chromosomestudio.com) and from Italy Scarpa (studio-venturini.com) and Kerotoo (kerotoo.it). The four artists worked non-stop for  eight days to realize one of the most significant graffiti on the theme of water present in Europe. The graffiti was painted on the external walls of the building just in front of RIZZI. At the inauguration were present important peronalities of the academic and political field such as the Major of Udine , Furio Honsell, and the Rettore of Universita’ degli Dtudi di Udine, Cristiana Campagno.

WRU, the web radio of Universita’ degli Studi di Udine (webradio.uniud.it), gave more and detailed information about the artists and thanks to them it was possible to follow the live broadcast of the inauguration of the event.

The roots of the names Hydrogen and Oxygen, γεν from the greek, meaning generate (wikipedia). Combined generate water. There are several writers who are preparing to tap a key issue. Combined create art. Will see some good news between bubbles! 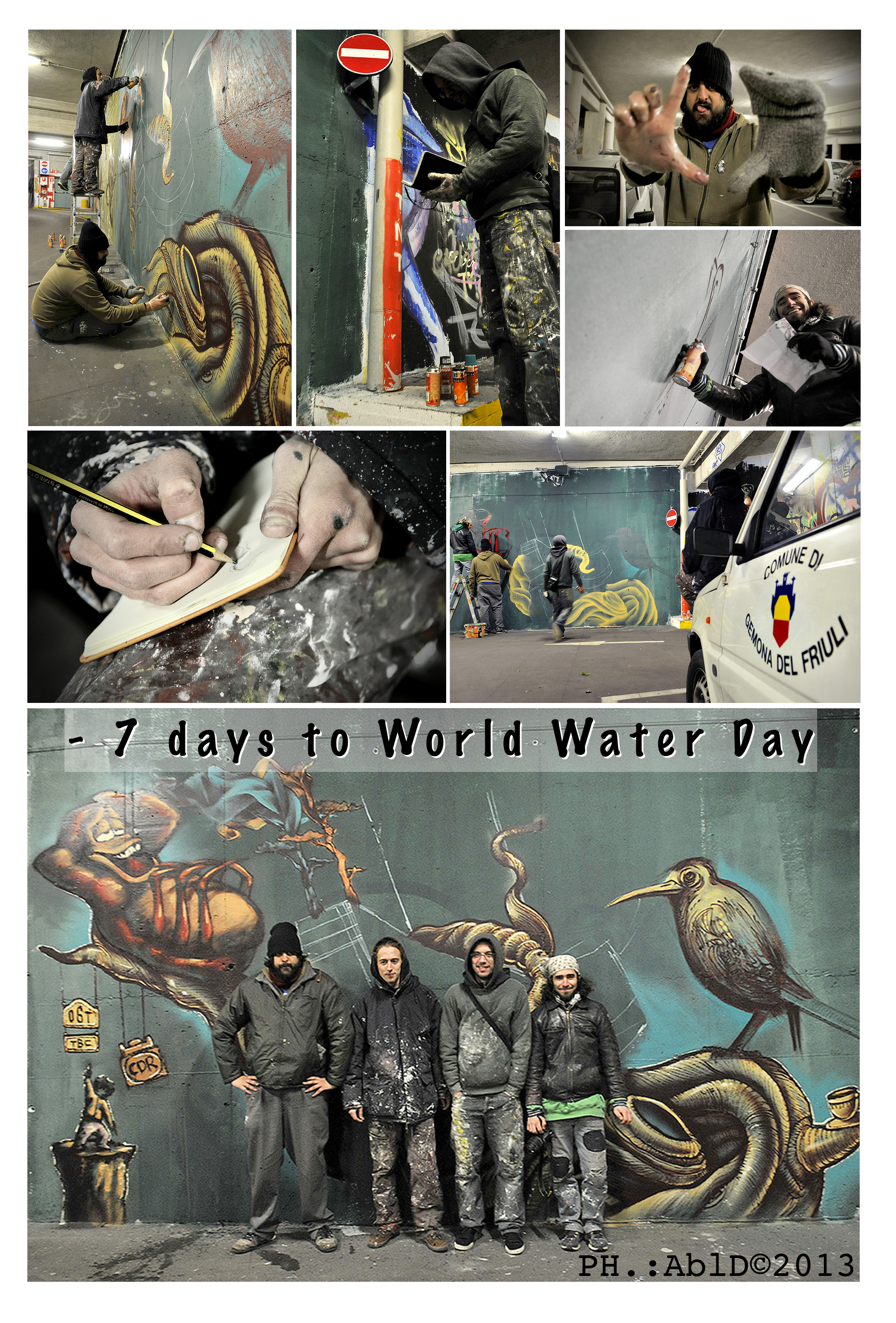 BRAVI RAGAZZI together with MACROSS, REGIONE FRIULI VENEZIA GIULIA and HOME PAGE MUIC FESTIVAL organizes starting December 2012 a project to develop street-art talents and the capability of approaching and working on a urban space as a urban artist (speed, harmony, dimensions, composition, etc.). The project is divided in three parts. The first one consists in a “Sketch contest”. The participants present a creation on paper and some of them are selected to continue to the second phase of the project. The second part consists in a course led by a popular writer. This section is a workshop and challenging competition in developing skills in writing letters -lettering. This phase is called “The battle”. The third part is an exposition of the best creations named “Do not touch”.

The project called Homepage festival is addressed to young artists of region Friuli Venezia Giulia aged between 14 and 35 years old. The participation is free of charge. The disciplines involved are nine:music, circus theatre, digital graphics, video, photography, installation, street art, presenting shows, drawing. This project is created by ASSOCIAZIONE DREAMERS FVG and is financially supported by REGIONE AUTONOMA FRIULI VENEZIA GIULIA.
The intense workshops will give the most brilliant participants the possibility of carrying on their activity and passion in a total independent way. All the participants will be invited to freely take part to all the events organized by the project.
The project starts in December 2012 and runs for 18 months. The project is divided several phases. 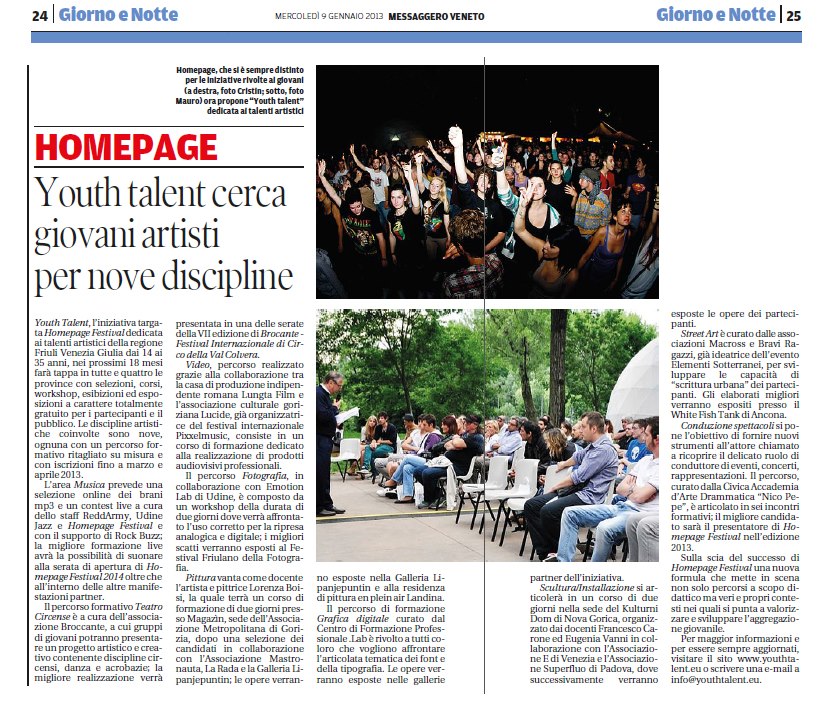